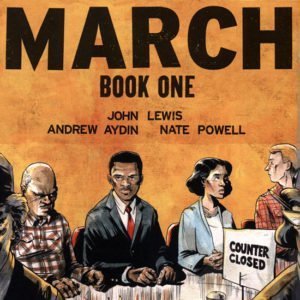 March: Book One is the first of a trilogy written by civil rights icon John Lewis, in collaboration with co-writer Andrew Aydin and award-winning graphic artist Nate Powell.

Lewis was chairman of the Students Nonviolent Coordinating Committee (SNCC) and was considered one of the “Big Six” leaders of the civil rights movement. He has served in the US Congress since 1987 and was awarded the Medal of Freedom by President Obama in 2011.

Book One tells of Lewis’s childhood in rural Alabama, his desire as a young man to be a preacher, his life-changing interactions with Martin Luther King, Jr., and the nonviolent sit-ins he joined at lunch counters in Nashville as a means of undermining segregation.

Vermont Humanities won one of four 2020 Schwartz Prizes for outstanding public humanities programming in the U.S. for Vermont Reads 2019: March: Book One. The award is given by the Federation of State Humanities Councils.

Learn more about this award