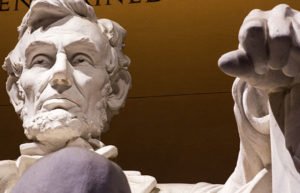 Manchester ~ Biographer Harold Holzer, recipient of the National Humanities Medal, will discuss Abraham Lincoln’s historic second inaugural address in a talk at First Congregational Church in Manchester on May 1 at 7:00 pm. His talk, “Lincoln’s Second Inaugural Revisited,” is part of the Vermont Humanities Council’s First Wednesdays lecture series and is free and open to the public.

Historians rank Abraham Lincoln’s majestic second inaugural address as one of the greatest political orations in American history. But at the time, the speech generated entirely partisan responses even as the Civil War headed toward Union victory. Holzer will revisit the unforgettable day of March 4, 1865.

Holzer is one of the country’s leading authorities on Abraham Lincoln and the political culture of the Civil War era. A prolific writer and lecturer, and frequent guest on television, he served for nine years as co-chairman of the United States Abraham Lincoln Bicentennial Commission (ALBC), appointed by President Clinton in 2000. President Bush, in turn, awarded Holzer the National Humanities Medal in 2008. Holzer has written hundreds of articles for both popular magazines and scholarly journals. His television appearances include C-SPAN, The History Channel, PBS, The Today Show, CNN, and others. He lectures before Civil War and Lincoln groups and at museums, colleges, and history conferences throughout the country, and is the recipient of numerous awards for his work, including the coveted Lincoln Prize. He has authored, co-authored, and edited 40 books.

The statewide underwriters for the First Wednesdays 2018-2019 series are The Alma Gibbs Donchian Foundation, the Windham Foundation, and the Institute of Museum & Library Services through the Vermont Department of Libraries.

A statewide nonprofit organization founded in 1974, the Vermont Humanities Council seeks to engage all Vermonters in the world of ideas, foster a culture of thoughtfulness, and inspire a lifelong love of reading and learning. Because Ideas Matter.