Bread and Roses, Too

This year’s Vermont Reads book, Bread and Roses, Too, provides opportunities for numerous extension activities ranging from book discussions to local historical presentations to sing-alongs. The kinds of activities that promote shared reading and discussion are bounded only by the imaginations that you and your collaborators bring to the project. If you develop a new idea, please let us know so that we can share it with other communities!

Please be sure to let us know in advance about your Vermont Reads-related events by submitting them via our online form and we will help spread the word!

Bread and Roses, Too Activity Ideas

Ideally, a discussion group should be facilitated by a person comfortable leading conversations in which everyone feels encouraged to participate. Facilitators might be teachers, librarians, or others who are skilled and enthusiastic about leading a discussion. See the Vermont Reads 2018 discussion guide for discussion questions and tips for a successful book discussion. Note: VHC does not fund discussion facilitators for Vermont Reads; facilitators should either be volunteers, or project coordinators must make their own honorarium arrangements with facilitators.

Discussion about books related to Bread and Roses, Too

Host one of VHC’s Reading & Discussion series or individual books on:

Advertise a day or evening read-a-thon, where participants take turns reading chapters from Bread and Roses, Too aloud. Everyone who wishes to participate should have the opportunity. This is a unique way for people of all ages and backgrounds to share the reading experience.

In addition to (or instead of) writing, young people and adults may wish to express their feelings about poems through artwork, music, or dance. Have participants create their own marching banners, like the one Rosa made for the strike or like the Barre residents made to welcome the children from Lawrence. Have participants create drawings or paintings based on a character or an event from Bread And Roses, Too.  Arrange for exhibit space at your local library, school, museum, or coffee shop to show participants’ work. Paper hats – Workers in granite sheds and other manual labor jobs (especially printing presses) often wore square hats made from newsprint to keep their hair clean (as described on page 202 during Jake’s first trip to Mr. Gerbati’s granite shed). The Wonder How To website has a short video demonstrating how to make these hats. Soap Carving – Children can try their hand with carving techniques (like Mr. Gerbati’s flowers) using a bar soap instead of granite. See a a demonstration video from the Metropolitan Museum of Art.

Listen to the VPR Broadcast

Gather a group around the radio — or around a computer — to listen to VPR’s Vermont Reads program after it is made available on the web. Vermont Public Radio is VHC’s media partner for Vermont Reads. Use the program as a lead-in to a discussion. Broadcast dates and times will be publicized when they are available.

The last half of the book takes place in Barre, Vermont, where author Katherine Paterson lived for many years. Known as the “Granite Capital of the World,” Barre has a well-preserved history prominently featuring immigration, industry, and labor movements.

The Old Labor Hall – Rosa, Jake, and all of the other Lawrence children are welcomed to town with a huge feast at the Labor Hall in Chapter 17. The Socialist Labor Party Hall still stands, thanks to the preservation efforts of the Barre Historical Society. The website has extensive information on the history of the Hall, the Bread and Roses strike, and Barre’s continuing connection to Lawrence. The building is used now primarily for special events, but tours may be arranged by contacting  or call (802) 476-5600 to leave a message.

“The Emergence of the Granite City: Barre 1880 to 1940.” From 1880 to 1940 Barre’s population increased from 2,206 to 11,855, and it became known as the granite center of the world. In addition to their diverse customs and languages, many of the new residents had political beliefs that contrasted with those of most native Vermonters. With immigrant populations from French-Canada, Scotland, Italy, and many other European countries, Barre became a cosmopolitan city distinct from other communities in Vermont.

“The Art of Granite” will explore the continuing use of Barre granite in sculpture, highlighting the continuity between classical techniques and the innovation and creativity of today’s artists. Featuring collections from both the Vermont Historical Society and the Vermont Granite Museum, this tribute to Barre’s working artists highlights meaningful aspects of the artistic process.

Robert Burns Memorial – Located on the front lawn of the Vermont History Center. On page 236 of the book, Duncan the Scottish stone carver takes runaway Jake to visit this statue and explains its significance and the relief panels on the base, carved by Elia Corti.

Hope Cemetery – The final resting place for thousands, including Elia Corti, this 65-acre cemetery is renowned as a showcase for Barre’s stone carvers.  Keep an eye out for the fine flowers carvings on the early 20th century stones, like those that Mr. Gerbati was known for in the book (p. 204).

Rock of Ages- Granite Quarries and Visitor Center – The Rock of Ages Company offers guided and self-guided tours of its quarries and factory. Open seasonally. Check the website for the 2018 schedule.

Host a Movie Night or Series

There are a number of documentaries and movies related to the labor movement that may provide historical context and complement the themes of Bread and Roses, Too. The movies noted with an asterisk (*) are approved for screening through the Vermont Department of Libraries (VTLIB)’s motion picture public performance license with Movie Licensing USA. Visit the VTLIB website for information on registering for this service.

Among the topics Vermont Reads: Bread and Roses, Too addresses are issues related to:

Convene a panel of informed and interested community members to bring their perspectives to these and other issues related to Bread and Roses, Too.

Writing contests are a popular means for younger readers and writers in particular to approach the written word. Entries can be assembled in print or on the web, and winning selections can be read at a special event. If you choose to run a contest, we suggest offering prizes in different age or grade categories. (Be sure to let us know about the contest so we can help advertise it.) 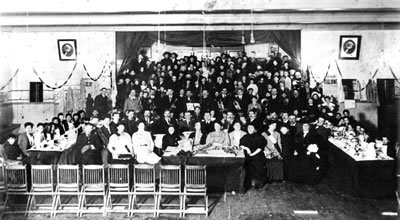 Communities often choose to conclude their Vermont Reads activities with a festive and fun event co-hosted with other collaborating organizations. You might choose to recreate the welcoming banquet for the children arrived in Barre described in Chapter 17, “At the Labor Hall.” The menu for this Italian-American feast is described on pages 169-170 and includes pasta, sausage with tomato sauce chicken, polenta, freshly baked bread,  and cakes. Organize a talent show or cabaret for performers or presenters of any kind based on activities inspired by the book and its compelling characters and events. These final events are also useful for showcasing student work done as part of the Vermont Reads project, recognizing contest winners, or hosting a panel discussion or presentation.

Libraries, Bookstores, Schools – Create a prominent display of Vermont Reads Bread and Roses, Too books and other related titles at the public library, school library, or local bookstore.