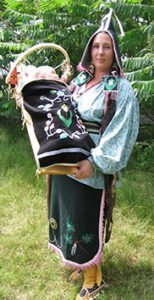 A partnership between the Lake Champlain Maritime Museum, Vermont Abenaki artists, and the Flynn Center for the Performing Arts, Alnobak: Wearing Our Heritage presents Abenaki garments and accessories as traditional and contemporary art and reflections of culture, history, and identity. The exhibit was featured at the LCMM’s Abenaki Heritage Weekend June 24-25. The VHC grant will support panel discussions at area libraries relating to the exhibit.

VHC’s Grants program supports nonprofit organizations that conduct humanities-related projects; in 2016 VHC awarded a total of $40,000 to these organizations for twenty-one projects.

New VHC-funded grant projects in 2017 include the “To Sing of Common Things” Humanities Speakers’ Series (Clemmons Family Farm, $1,500), which guides audiences through landmark African American/African literature, music and performance; Oral Histories of Canaan, Vermont (Alice M. Ward Memorial Library, $1,400) for a participatory public oral history program; Afro-Atlantic Sacred Arts (Robert Hull Fleming Museum, $3,000) for public programming related to an exhibition highlighting the connections between sacred traditions in West Africa, Haiti, Cuba, and Brazil; Bringing the World to our Community (One World Library Project, $2,500) for the expansion of public programs in 2017-2018 that foster an exchange of ideas and experiences about world cultures; and Latchis Arts Enriched Film Screenings (Latchis Arts, Inc, $1,000) for a film series that seeks to enrich conversations emerging from films with scholars, speakers, and journalists.

Twice a year, through a competitive grant process, VHC makes awards to museums and libraries, film, music and literary festivals, local historical societies, and other nonprofit organizations to support public humanities programs that contribute to the achievement of its mission. VHC makes awards of up to $5,000. Organizations wishing to apply should visit vermonthumanities.org or call 802.262.1355. For the Fall 2017 application round, VHC will accept letters of intent from July 24 to August 25 and proposals from September 4 to October 6. Awards will be made by December 14.

For more information about the VHC Grants program, email , call (802) 262-1355, or visit vermonthumanities.org/humanities-grants.

Vermont Humanities Council is a private nonprofit working to bring the power and the pleasure of the humanities to all Vermonters—of every background and in every community. The Council strives to make Vermont a state in which every individual reads, participates in public affairs, and continues to learn throughout life. Because Ideas Matter.