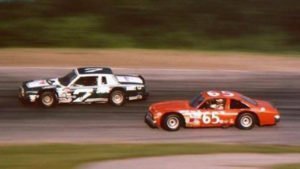 Statewide ~ Vermont Humanities Council has awarded the Milton Historical Society and Museum a $1,000 grant for its project The History of Racing in Milton, one of ten projects that received awards in VHC’s Fall 2016 grant cycle.

The History of Racing in Milton will comprise a three-month series of talks, panel discussions, oral history opportunities, and exhibits of racing memorabilia capturing the car racing frenzy in Milton from 1955-1987 at Catamount Stadium, which paralleled the historic rise of NASCAR nationwide.

VHC’s Grants program supports nonprofit organizations that conduct humanities-related projects; in Fall 2016 VHC awarded a total of $16,900 to these organizations.

Other new VHC-funded grant projects include Coming Home from War (South Burlington Community Library, $600) to support a five-part speaker series exploring the universal experience of war and its impact on our communities; An Abolitionist Family Photo Album (Rokeby Museum, $3,000) to support talks about the history of abolition and its continuing relevance today; the Vermont Authors Project ($2,500) to support a network of Vermont authors, indie bookstores, book clubs, libraries, festivals, and others; Black America since MLK: And Still I Rise (Vermont PBS) to support screenings of Black America Since MLK: And Still I Rise and panel discussions led by community leaders throughout Vermont; and Burlington Rising (Fletcher Free Library, $2,000) to support a series of lectures, culinary workshops, and community discussions centered on the historical role of food in human civilization and its connection to cultural identity.

Twice a year, through a competitive grant process, VHC makes awards to museums and libraries, film, music and literary festivals, local historical societies, and other nonprofit organizations to support public humanities programs that contribute to the achievement of its mission. VHC makes awards of up to $5,000.

Organizations wishing to apply should visit vermonthumanities.org or call 802.262.1355. For the Spring 2017 application round, VHC will accept letters of intent from January 23 to February 17 and proposals from February 27 to March 24. Awards will be made by May 12..

For more information about the VHC Grants program, email , call (802) 262-1355, or visit vermonthumanities.org/humanities-grants.

Vermont Humanities Council is a private nonprofit working to bring the power and the pleasure of the humanities to all Vermonters—of every background and in every community. The Council strives to make Vermont a state in which every individual reads, participates in public affairs, and continues to learn throughout life. Because Ideas Matter.