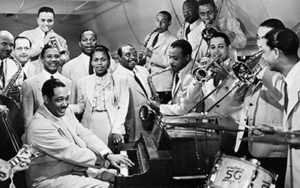 This illustrated lecture incorporates a blend of visual and audio of the Harlem Renaissance. William Tortolano, professor emeritus of Fine Arts at the St. Michael’s College, will draw upon a vivid recollection of the 1920s and 1930s, the great beginning of the African-American cultural rebirth of music, art, poetry, literature and many other manifestations. END_OF_DOCUMENT_TOKEN_TO_BE_REPLACED

Singer and historian Linda Radtke, in period garb, celebrates the centennial of the passage of the 19th Amendment. Music was essential to the movement; each state convention of suffragists began and ended with songs. Radtke also traces the movement 's alignment with other social justice initiatives such as temperance, labor conditions, wage equity, peace, and children's welfare. END_OF_DOCUMENT_TOKEN_TO_BE_REPLACED