So Close to Home: A True Story of an American Family’s Fight for Survival During World War II 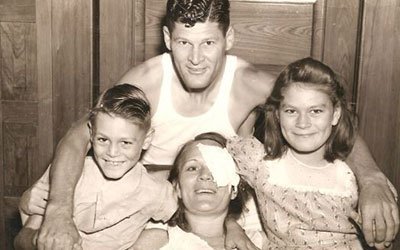 On May 19, 1942, a U-boat in the Gulf of Mexico stalked its prey fifty miles from New Orleans. Captained by 29-year-old Erich Wurdemann, the submarine set its sights on the freighter Heredia with 62 souls on board.

Most were merchant seamen, but there were also a handful of civilians, including the Downs family: Ray and Ina, and their two children, eight-year-old Sonny and eleven-year-old Lucille. Fast asleep in their berths, the Downs family had no idea that two torpedoes were heading their way.

Quoting from Commander Wurdemann’s War Diary, the story adds balance and perspective to war narratives by chronicling the daring mission of the U-boat and its commander’s decision-making in the Gulf of Mexico.

Author Alison O’Leary will present the story with dramatic images in a multimedia event for all ages.

Photo courtesy of the Downs Family

Alison O’Leary - Author Alison O'Leary is a longtime journalist who has worked for newspapers in Texas, Nevada, Maine, and Massachusetts. See full biography.