With all the talk in the news today about alternative facts and untrue statements, I’ve been reminded that before Google and Wikipedia, the best source of accurate information was usually the local reference librarian.

And I’ve been wondering what librarians might say was the oddest question they’d ever been asked. 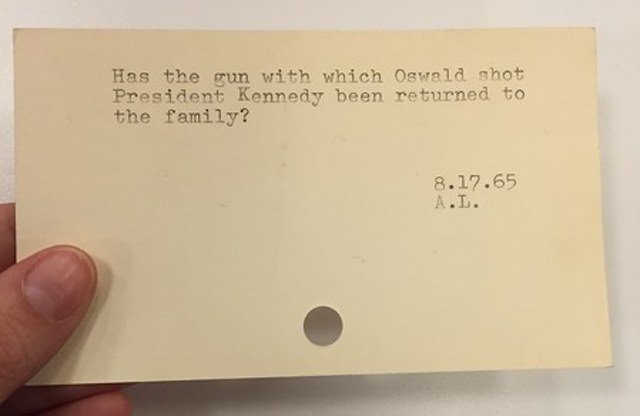 One told me somebody once asked him, “Why do chickens walk like this?” – then proceeded to repeatedly jerk his head forward and back as far and as fast as he could.

Another librarian told me that when a high school student asked, “Do you have any books about sex?, she was proud to think she’d handled the question ever so professionally and sensitively, until the young man interrupted, “No, not sex! Sects! S-E-C-T-S!”

He wanted to learn about religious groups that had separated from the main body of believers.

My favorite question may be, “Do you have any books about horses’ dreams?”

“No!” the person interrupted.  “Horses’ dreams!”

I mean, how could anyone know enough about that to write a book?

Then I hit the mother lode with an online story about a recently discovered box of questions that people had asked the New York Public Library, by phone or in person, between the 1940s and the 1980s. The article had photos of file cards with questions either hand-written or typed on a manual typewriter. Questions like:

“Are Plato, Aristotle, and Socrates the same person?”

And “Are black widow spiders more harmful dead or alive?”

I especially like “Can the [New York Public Library] recommend a good forger?”

“Has the gun with which Oswald shot President Kennedy been returned to the family?”

And “Does the Bible have a copyright?”

There was actually an answer to the question, “What is the life span of an eyebrow hair?” that went like this: “Based on the book Your Hair and Its Care, it’s one hundred and fifty days.”

Maybe the questioner had dyed their eyebrows and was wondering how long the new look would last.

It was 1962 before Rachel Carson’s Silent Spring, a seminal book written for the general public, answered that question definitively, with an emphatic “NO!” — an answer that improved the world immeasurably.