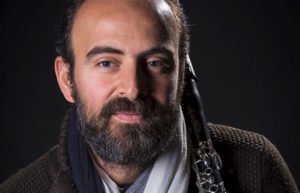 Clarinetist Kinan Azmeh has been hailed as a “virtuoso” and “intensely soulful” by the New York Times and “spellbinding” by the New Yorker. His utterly distinctive sound across different musical genres has gained him international recognition as an instrumentalist and composer. Kinan toured with Yo-Yo Ma’s Silk Road Project, for which he won a Grammy in 2017.

His discography includes three albums with his ensemble Hewar, several soundtracks for film and dance, a duo album with pianist Dinuk Wijeratne, and an album with his New York Arabic/Jazz quartet the Kinan Azmeh CityBand.