Home » About Us » Our People » Board of Directors » Judith Chalmer, Chair 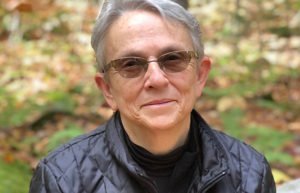 Judith Chalmer of Burlington joined the board of Vermont Humanities in 2019 and serves on the Accessibility and Finance Committees. She is the former director of VSA Vermont, recently re-named Inclusive Arts Vermont, a nonprofit focused on arts and disability.  Prior to that she taught creative writing to non-traditional college students.  In 2018 she received the Arthur Williams Award from the Vermont Arts Council for Meritorious Service in the Arts.

She is the author of two collections of poems and is co-translator of two books of haiku and tanka. In 2010 her poems set to original choreography were performed as part of the Flynn Center’s LGBTQ Stonewall Celebration. In 2001 she received the Great Performances Award from the Onion River Arts Council for creating and directing a dance narrative featuring oral histories by Central Vermonters who were immigrants to the United States. She was a discussion leader for the Vermont Reading Project from 1992-2002 and a scholar for the New England Foundation for the Humanities.