“The humanities made my small world much bigger” 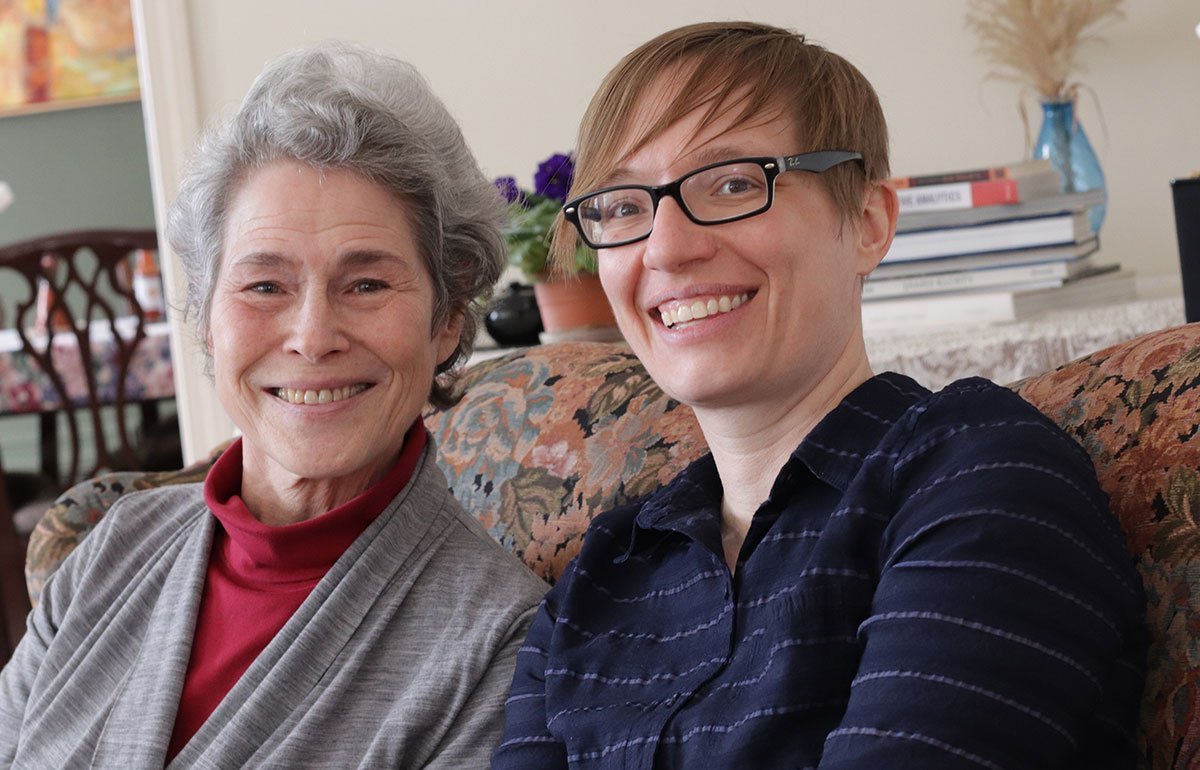 Longtime Vermont Humanities supporter Lisa Schamberg (left) and board member Liz Fenton discussed the importance of the humanities during an afternoon chat at Lisa’s home.

We joined Lisa Schamberg and Liz Fenton for a conversation in Lisa’s Burlington home. Lisa is a retired educator who worked with literacy students at Burlington High School. She and her husband, Pat, are longtime supporters of Vermont Humanities. Liz is an Associate Professor of English at UVM who has served as the associate director of the UVM Humanities Center. She joined the Vermont Humanities board in 2018.

How did you get involved with Vermont Humanities?

Lisa: When Pat was on the state board of education, he met Victor Swenson, who was the Executive Director of Vermont Humanities at the time. Victor seeded in me the idea of reading aloud to students, to always have a chapter book going. At one point, I invited Victor to come in and read to my class, and he was fabulous, as you can imagine. They loved hearing men reading to them, it was such great role modeling.

Liz: I had really enjoyed the collaborations that the UVM Humanities Center had done with the Council, and it seemed like a nice way to continue the work I’d been doing with the Humanities Center but in a different register. I’m kind of new to the idea of public humanities, but I’ve been interested in the idea of doing things with the humanities outside of my classrooms.

What were some of the programs that you have taken part in?

Lisa: We have a granddaughter who’s now 15. She used to spend a night a week here, so we always had a chapter book going with her. We always got the Vermont Reads book and added it to the mix of what we read together. Shortly after Brown Girl Dreaming [by Jacqueline Woodson, Vermont Reads 2017], she kind of outgrew having us read to her. She’d go up and read to herself.

Liz: I did an Ideas on Tap talk at ArtsRiot, on The Book of Mormon. And I had introduced Huck Gutman when he did a First Wednesdays in St. Johnsbury, which was a lot of fun, because Huck had been my professor, then my colleague. I was really flattered when they asked me if I would introduce him. It was a nice way for me to say thank you to him for being such an important professor for me.

What do the humanities mean to you?

Lisa: I flash back to being four or five years old, beginning to read on my own. I was a very shy kid and being able to read opened up the world to me. I learned to see the gray areas, that things aren’t always right or wrong. You learn a lot about empathy. When you get involved in a character, you are being empathetic. Even the bad characters have things that you feel sorry about for them.

Liz: Well, the short answer is everything. I grew up in a very small town in rural Vermont, and it is a beautiful place that also can feel very claustrophobic and very insular. For me, the humanities, the study of literature and the study of language, were a way to make my very small world a lot bigger, and a way to imagine possibilities that didn’t seem available to me in my immediate circumstance. It’s not like I had this terrible life, but it was just a very small life in a small place.

What excites you about the work that Vermont Humanities can do in the future?

Lisa: We have to do everything we can to get people to be thoughtful and to have empathy and to have an ethical base. It’s really important to put out the notion to students that that ideas are important, and that we need to be able to have dialogue, even if it’s difficult.

Liz: I think that’s what the humanities are for: coming up with a framework to talk about things that are hard to talk about. It takes a lot of intestinal fortitude, I think, to have heated discussions, and to engage with serious ideas. That’s the thing about public humanities that I find personally most exciting, but also most terrifying. It is where real change can happen.