In his award-winning Dirty Work: Essential Jobs and the Hidden Toll of Inequality in America, journalist Eyal Press examines the morally troubling jobs that society tacitly condones, and the hidden class of workers who do them. Press, a contributor to The New Yorker and The New York Times, discusses his reporting for the book, which won the 2022 Hillman Prize for book journalism and appeared on numerous “best books of 2021” lists. 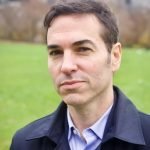 Eyal Press grew up in Buffalo, which served as the backdrop of his first book, Absolute Convictions (2006). His second book, Beautiful Souls (2012), examined the nature of moral courage through the stories of individuals who risked their careers, and sometimes their lives, to defy unjust orders. A New York Times editors’ choice, the book has been translated into numerous languages and selected as the common read at several universities.

The Making of the Graphic Novel: 1177 BC The Year Civilization Collapsed

In this First Wednesdays event at the Brownell Library on November 2, 2022, author/illustrator Glynnis Fawkes reads from and discusses her latest work-in-progress and describes how the storytelling elements of comics—panel design, pacing, research, and narrative—are employed in creating non-fiction graphic novels. She also reviews the comic she contributed to the Vermont Reads 2022 book, The Most Costly Journey (El Viaje Más Caro).

Author and Middlebury professor Gloria Estela Gonzalez Zenteno discusses her new novel Arribada, about a woman pushed to confront her role in environmental and social injustice, and a well-to-do family’s realization that their comfortable position rests on crimes against the natural world, their town, and their loved ones.

North: A Reading and Discussion of the Novel

A finalist for the Vermont Book Award, North is a moving story about a Vermont monk, a Somali refugee, and an Afghan war veteran whose lives converge on a snowy Vermont night. Author Brad Kessler reviews the creation of the novel and his ongoing work with new Americans in Vermont.

In this First Wednesdays event recorded on November 2, 2022 at the Rutland Free Library, UVM lecturer Chris Vaccaro explores J.R.R. Tolkien’s devotion to the Blessed Virgin Mary and his occupation with female divinities such as Varda, Yavanna, Melian, Luthien, and Galadriel in his work. Vaccaro compares these divinities with goddesses within Greco-Roman, Celtic, and Norse mythologies and considers Tolkien’s influences.

In his award-winning Dirty Work: Essential Jobs and the Hidden Toll of Inequality in America, journalist Eyal Press examines the morally troubling jobs that society tacitly condones, and the hidden class of workers who do them. Press, a contributor to The New Yorker and The New York Times, discusses his reporting for the book, which won the 2022 Hillman Prize for book journalism and appeared on numerous “best books of 2021” lists.

On his farm overlooking Brattleboro, Rudyard Kipling wrote the Jungle Book and many of his Just So Stories, and began to draft his great novel, Kim. Christopher Benfey, author If: The Untold Story of Kipling’s American Years, answers hard questions about Kipling’s time in this country, including whether he should be considered partly an American writer.

Reflections on Writing and Illustration

Vermonter Jason Chin has written and illustrated many acclaimed children’s books, including Grand Canyon, Redwoods, and Your Place in the Universe. He received the 2022 Caldecott Medal for illustrating Watercress by Andrea Wang. In this presentation at The Brownell Libary on October 5, 2022, he describes his passion for nature, science, and art,  and discusses the impact of his work with young people.

Author and theologian Damian Costello explores how the practice of maple sugaring in Vermont connects us to the land, our ancestors, and all that surrounds us. In conversation with the bestselling book Braiding Sweetgrass by Robin Wall Kimmerer, he suggests that sugarmaking—which is informed by Indigenous wisdom—is a communal medicine of connection that teaches mutual reciprocity with the land.

The Legacy of “The Notorious RBG”

Supreme Court justice Ruth Bader Ginsburg was a feminist superhero who could still do a plank at 87 and who survived pancreatic cancer long beyond expectations. Dartmouth history professor Annelise Orleck examines the life of the brilliant jurist who remained fiercely progressive, unapologetically liberal, and committed to equality to the end, and who loved her status as a pop culture idol.

Disability and the Poetry of Natural and Supernatural Worlds

Three poets—Eli Clare, Judy Chalmer, and Toby MacNutt—reflect on the ways disabled poets write about natural and supernatural spaces. In this wide-ranging discussion, they consider how poetry invites us into an embodied experience, and how supernatural poetry can expand or question traditional understandings of the “natural.”

Leaving the World of the Temporarily Abled

Artist and legislator John R. Killacky shares his journey of overcoming paralysis from spinal surgery complications 25 years ago. He also reflects on how reentering the world in a disabled body radically changed his perspective in his artistic practice as well as in his advocacy for artists with disabilities.

Sarah Henstra: “Every Novel Is a Love Letter”

In this fascinating talk, the author of our Vermont Reads 2021 choice, “We Contain Multitudes,” examines the writing and reading of letters as a literary device and also as a forum for self-expression and self-creation.