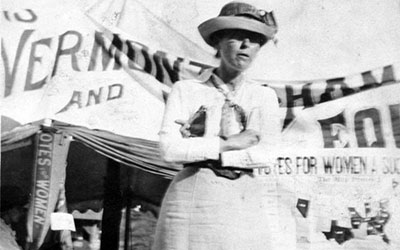 Singer and historian Linda Radtke, in period garb and “Votes for Women” sash, celebrates the centennial of the passage of the 19th amendment, specifically highlighting the decades-long persistence of Vermonters, both women and men. Music was essential to the movement: each state convention of suffragists began and ended with songs such as “Shall Women Vote?” “New America,” “Giving the Ballot to the Mother’ or “Voting as we Pray,” as well as rousing Christian hymns. Radtke also traces the movement ‘s alignment with other social justice initiatives such as temperance, labor conditions, wage equity, peace, and children’s welfare. Both the songs and stories in Radtke’s engaging presentation, accompanied by pianist Cameron Steinmetz, highlight Vermonters’ efforts from 1840-1921, as they lobbied in churches, at “parlor meetings” at town halls and at the State House for total enfranchisement.