Vermont folklorist Jane Beck shares the story of the Turner family, a multigenerational saga spanning two centuries, played out across three continents. The saga was related to Jane Beck by Daisy Turner, who had listened to her father, Alec Turner, recount stories of the family past.

Daisy also shared her own life story, a powerful and rare account of the African American experience in New England from the 1880s forward. 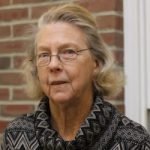 Jane Beck - Jane, founder and former executive director of the Vermont Folklife Center, is the author of Daisy Turner's Kin, An African American Family Saga, based on sixty interviews with the daughter of slaves. See full biography.