Alfred Starr Hamilton, who talked in metaphor, wrote poems so deeply metaphoric that one can enjoy them both for their fairy-tale charm and as serious confessions of unease in 20th-Century America. An unheralded, solitary peace activist, Hamilton refused to “take cover” during a 1950’s air raid drill, and was arrested for civil disobedience.

Far from a public person, he lived alone and stayed in contact with the world through his poems. For at least a decade he sent 45 new poems a week to Epoch, Cornell University’s national literary magazine, which published several over the years.

For that’s a pint of red daisies
that has been sent to your florist
that he has become your drunkard.

In this informal presentation, Geof Hewitt will talk about his visits, as an undergraduate, to Hamilton’s rooming house, and how he learned the key to Hamilton’s metaphoric work. Several of Hamilton’s poems will unfold as participants discuss his idiosyncratic use of metaphor: verbal magic! 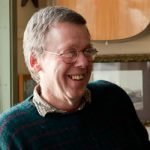 Geof Hewitt - Geof is the author of four books of poems and three books for teachers, and is Vermont’s reigning poetry slam champion. See full biography.