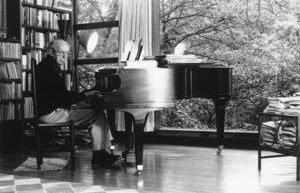 Pianist Michael Arnowitt offers a program surveying the music of Aaron Copland, who created what is considered today to be a distinctively American sound in classical music. His landmark compositions from the 1930’s and 1940’s used energetic jazz rhythms and folk song material from different regions of the United States and Mexico, blended into his own classical music writing style. His signature widely spaced, slow-moving chords helped depict the vast American landscape, in contrast to the crowded, densely populated countries of Europe. Michael Arnowitt will perform and discuss music from Copland’s Four Piano Blues, Piano Variations, El Salon Mexico, and Copland’s famous Appalachian Spring. Also included on the program is Conversation at the Soda Fountain, from the music Copland wrote for the film version of Thornton Wilder’s Our Town.

Copland was one of a wave of American composers who travelled to Paris in the early twentieth century to study with the renowned teacher Nadia Boulanger at the Fontainebleau School in France. Michael Arnowitt also attended this school in 1980 and will recount anecdotes about Fontainebleau. While Copland was influenced by his European travels and being exposed to the modern composers Igor Stravinsky, Arnold Schoenberg, and Anton Webern, and even wrote a song setting of a poem of E.E. Cummings, Copland returned to our country determined to create something uniquely American. The optimistic, clear tone of his musical style became iconic and has influenced American composers to the present day and contributed to the cultural creation of an American consciousness and character. 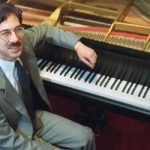 Michael Arnowitt - Michael is an internationally-known classical and jazz pianist with over thirty years of concert experience in Europe, the U.S., and Canada. See full biography.