1964: A Watershed Year in Vermont’s Political (and Cultural) History In 1964, the Republican Party lost its tight-fisted grasp on Vermont politics, starting the swing of the political pendulum from Vermont as bastion of conservative republicanism to a state with a highly diversified political climate featuring progressive and even radical politics.

Novelist Deborah Luskin, whose extensive research into the politics of mid-century Vermont was undertaken in the writing of ‘Into the Wilderness,’ a love story that takes place against the two major political events of that year, shows how the shift is more complex and more nuanced than mere politics. 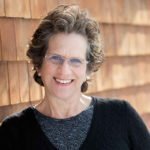